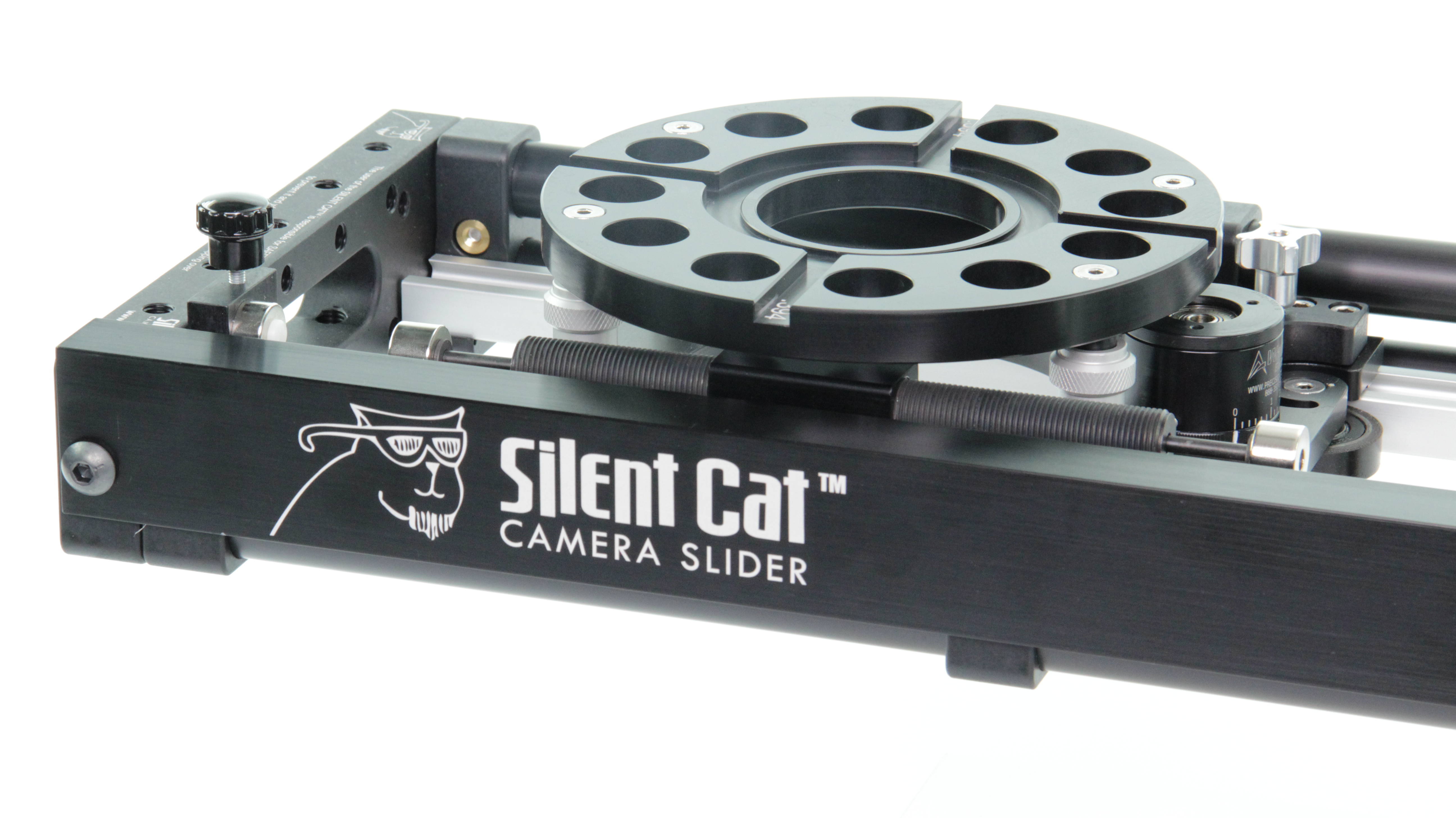 The Patented SILENT CATTM CAMERA SLIDER is the quietest, smoothest and most versatile camera slider that mobilizes any motion picture camera, digital camera, video camera, and any media recording device. The Silent Cat Camera Slider was built for full size film and digital cameras. It has a payload capacity of 160 lbs. yet it provides the same smooth and quiet ride for smaller cameras that weigh as little as 12 lbs. The Silent Cat Camera Sliders have a standard Motion Picture Industry Mitchell Mount. That Cat-Silent Cat manufactures Mitchell to 100 MM Ball Adaptors as well as a 150 MM Ball Mounts to allow the operator to use the full spectrum of camera heads on a Silent Cat Camera slider that are available to him

The Silent Cat Light Weight Perimeter Tubular Structure allows any Mitchell Mount Equipment to be top mounted or under slung** to it.

The Silent Cat Over Under Mitchell Mount Trolley is the most advanced and unique mounting system of this genre. It has an exclusive design that enables the user to switch from a top mounted camera position or to an under slung camera position requiring no tools.

Whether top mounted or under slung, all camera head tie downs will fit and the trolley will track unimpeded without the need for bolts and washers or any other additional equipment.

The Silent Cat Over Under Mitchell Mount Trolley has an easily accessible brake that is solid.

The SILENT CATTM CAMERA SLIDER can also be inverted and mounted to any under slung Mitchell Mount.

The Silent Cat Slider provides 20 - 3/8”-16 standard threaded holes for rigging in the End Blocks of the Silent Cat Light Weight Perimeter Tubular Structure.  That Cat-Silent Cat also manufactures (RIBS) Rigging Intermediate Blocks which are an accessory to provide additional rigging points throughout the Silent Cat Camera Slider. These design features allow the SILENT CATTM CAMERA SLIDER to be rigged to any situation that terminates to any standard 2K, 750, and 1 ¼” “Speed Rail” situation. By removing the 360 Degree Mitchell Mount Pan Mechanism, The Silent Cat Slider can lay on any flat surface. The 360 Degree Pan Mechanism has a solid brake that was designed to lock in any position rather than a geared position that needs to line up and alter the positon that the operator desires.

The Silent Cat Over Under Silent Mitchell Mount Trolley utilizes magnetic assisted dampeners to produce a soft stop whenever the trolley comes in contact with either end of the SILENT CATTM CAMERA SLIDER.  The Silent Cat Soft Stop Dampeners can also be used in conjunction with the start and stop tabs integral within the track to allow repeatable moves with the trolley.

The SILENT CATTM CAMERA SLIDER is the only camera slider with a true resistance mechanism for the trolley that enables the operator to create resistance on the slider to match the resistance on a fluid camera head.

The user of the SILENT CATTM CAMERA SLIDER is responsible for safety and judgment as to prevent the camera and what it is mounted to from tipping over.

DO NOT CANTILEVER the SILENT CATTM unless you support the opposite end of the Mitchell Mount with a stand to help support the weight. Use the selection of custom hardware to help facilitate this. The maximum recommended cantilever without this support is 36” Mitchell to Mitchell when using the Counter Weight Tray with appropriate counter weight.